Asia Pacific (excluding Japan) spending on augmented reality and virtual reality (AR/VR) is forecast to reach US $11.1 billion in 2018, an increase of more than 100% from $4.6 billion the previous year.

The latest update of IDC’s Worldwide Semiannual Augmented and Virtual Reality Spending Guide provides a detailed view at the investments on AR/VR products and services which have gained exceptional market momentum in 2018 and are expected to achieve a five-year compound annual growth rate (CAGR) of 68.5% throughout the forecast period (2017-22).

“The availability of new standalone VR headsets such as Oculus Go from Facebook and Mirage Solo from Lenovo is expected to drive adoption as well as content spending in 2018 and beyond, as these headsets eradicate the need for pairing with PCs or Consoles that used to drive costs higher for AR/VR experiences,”

Being the largest source of spending, the consumer sector will continue to drive growth for AR/VR products and services holding a 51.3% share of overall spending in 2018. The growth will be primarily driven by the availability of new headsets for VR which will lead to VR consumer spending.

While AR spending will be dominated by the purchase of services – the launch of Augmented Reality SDK platforms from both Google and Apple are also expected to drive spending on application development and games for mobile platforms.

In line with this trend, Augmented reality games in the consumer sector look very promising and projected to hit a five-year CAGR of 90.9%, whilst virtual reality games will register a growth of 54.7% five-year CAGR over the forecast period (2017-22). As expected, gaming is one of the most prominent use cases of AR/VR for consumers. 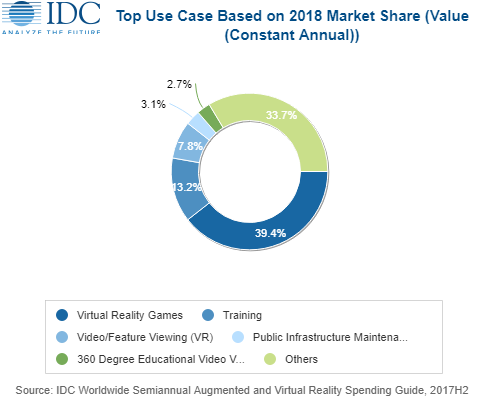 While consumer growth is anticipated to grow steadily, the commercial sectors or enterprise spending which represents more than 48% of AR/VR spending in 2018 is expected to overtake the consumer sector in the next five years with 58% share by the end of the forecast period. Each of the five commercial sectors is forecast to register solid growth in spending throughout the forecast period, led by the distribution and services, and public sector.

Distribution and services ($2.0 billion) will be the largest amongst the five commercial sectors in 2018, led by the personal and consumer services, retail, and professional services industries. The second largest sector will be manufacturing and resources ($1.7 billion) with balanced spending across the process manufacturing, construction, and discrete manufacturing industries.

Virtual reality games use case have the highest share among all the sectors, garnering a 39.4% share of overall spending in 2018. Likewise, with the rising hype in the market for augmented reality, there is an expected increment in the market for use cases in different sectors. In the distribution and services sector, training and retail showcases will be the two largest use cases with a combined spending of more than $329 million in 2018.

“The use cases for both AR and VR are proliferating in the enterprise segment as companies across sectors are developing new IT and business applications. Many enterprises in the region have already developed solutions utilizing AR and VR such as for design and visualization, corporate trainings, field maintenance and customer experience and marketing applications,” 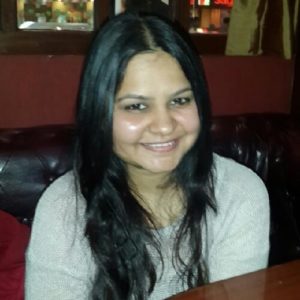 “AR/VR technologies are quickly crossing the chasm with several real-world applications emerging every day in both enterprise and consumer segments. Although, the Asia Pacific (excluding China and Japan) adoption is slower when compared with the US or even China markets, the growth trajectory is very promising with enterprises which are utilizing AR/VR technologies to accelerate their digital transformation strategies.

In terms of spending, the education industry is expected to top the charts from 2019 till the end of the forecast period out of the 19 industries covered in this spending guide. Other key industries driving growth for AR/VR include retail, manufacturing and healthcare,”

On a geographic basis, China will be the region with the largest AR/VR spending with 91.3% share of the overall spending ($10.2 billion) in Asia Pacific (excluding Japan) in 2018 and this trend is likely to rise over the forecast period (2017-22) with five-year CAGR of 70.5%. While, AR/VR technology in other countries of Asia/Pacific (excluding Japan) are slowly gaining trend and experimenting that how AR/VR can improve in retail and other industry experience.

The IDC Worldwide Semiannual Augmented and Virtual Reality Spending Guide examines the AR/VR opportunity and provides insights into this rapidly growing market and how the market will develop over the next five years. Revenue data is available for eight regions, 12 industries, 26 use cases, and eleven technology categories.

Unlike any other research in the industry, the comprehensive spending guide was created to help IT decision makers to clearly understand the industry-specific scope and direction of AR/VR expenditures today and in the future.