A number of highlight smart city innovations were showcased on 7 and 8 September 2017 as HKSTP hosted another round of the well-received APAC Innovation Summit 2017 (AIS) on Smart City.

Within Science Park’s optimal controlled environment, notable progress is being made in the research and development of various smart city technologies in the areas of mobility, cashless transactions, food industry automation and numerous other areas that benefit the Hong Kong society as a whole.

Commitment to Smart Region as a Smart City testbed reaffirmed

“The Smart City technologies showcased today are precursors. There are many more innovations being developed at Science Park, which has the unique attribute of having a complete ecosystem with R&D, manufacturing and funding stakeholders coming together seamlessly to help make innovations a marketable reality speedily.”

“The role as a ‘leading agent’ on fostering the Smart Region is cut out for HKSTP, given our unique position as a connector in the ecosystem. We will work closely with The Chinese University of Hong Kong (CUHK), our Smart Region partner, to make this part of Hong Kong a wondrous showcase of the Smart City vision.”

Science Park has been confirmed as an integral part of the Smart Region, together with CUHK, in the Consultancy Study on Smart City Blueprint for Hong Kong published in June 2017. The Smart Region is designated as a living lab that supports and pilots application of innovative solutions, and to drive adoption of new technologies, enhance collaboration and knowledge sharing.

Within the Smart Region, technologies that lead to Smart Mobility, Smart Living, Smart Environment and Smart People are in focus. HKSTP’s role as the “lead agent” in working with CUHK and technology companies at Hong Kong Science Park is also underscored in the report.

Smart Mobility is one of the key ongoing initiatives in the Smart Region plan. HKSTP has established the Smart Mobility Eco-System in Science Park, bringing together Park companies and their end-to-end innovative mobility solutions to the market. HKSTP plays a key role in accelerating collaboration between partner companies and relevant industries to achieve tight integration of applications stacked with sensor technology, A.I. algorithms and mobile communication.

During the AIS on Smart City, participants had a firsthand experience of various kinds of smart solutions developed by Park companies on the Smart Campus, from cashless payments to smart food technologies, fully automated stores and autonomous vehicles. 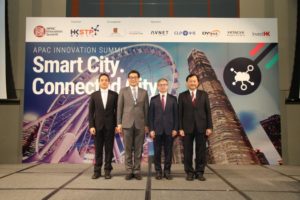 Cashless payment solution One2Paid will be trialed in Science Park retail outlets initially. The solution is developed by CamClaim Limited, a HKSTP incubatee that has achieved major success with its CamClaim 2.0 Mobile Business platform, certified by UnionPay to provide FinTech Online and online to offline Office payment solution in mainland China and Hong Kong.

The solution offers functions such as mobile office tools, staff claiming services, business traveler information service and a merchant hub. Extending beyond this platform, the new One2Paid FinTech payment service comes with a smart POS and B2M app. Registered users can key in payment amount and then generate a QR code for individual customers to make payment using a smart phone. The solution is expected to be widely applied in Hong Kong and subsequently extended to other markets in Southeast Asia.

Maxim’s Caterers Limited, with its manufacturing plant at Tai Po Industrial Estate, also demonstrated various innovations and future concepts on food-related technologies, including a 3D Food Printer for mass production of unique 3D food creations, a Robotic Arm that is able to write English and Chinese characters as well as paint pictures, and an Autonomous Guided Vehicle able to deliver food to programmed destinations autonomously, with an auto-pilot system that enables it to steer clear of obstacles in the way.

In conjunction with Park company XDynamics, Maxim’s also showcased a future concept of food delivery with an auto-pilot Drone that is able to deliver food to designated points of sale. It is envisaged that the big data collected by the smart solutions will also contribute to enhancing food safety in the long run.

In the AIS 2017 on Smart City, Connected City, the Smart City Blueprint for Hong Kong was shared by Allen Yeung, Office of the Government Chief Information Officer, HKSAR Government, and Smart City developments in other parts of the world were also explored. Over 1,000 attendees have registered to join the summit, indicating a high level of interest in Smart City technologies from Hong Kong’s innovation and technology ecosystem.