The partnership aims to achieve high security of autonomous and connected cars by developing a solution to detect and prevent intrusions into Electronic Control Units (ECUs) that control driving behaviours such as acceleration, steering and braking, as well as in-vehicle infotainment (IVI) devices including automotive navigation systems, and telematics devices.

The risks of hackers taking control of steering and braking systems in connected cars are real. New security vulnerabilities are discovered every day and they pose a risk for remote exploitation. It is therefore more important than ever to not only implement security measures in each vehicle but also to analyze new attacks by constantly monitoring in-vehicle systems from the cloud and utilize the results to implement countermeasures against cyber-attacks to all vehicles.

This partnership will leverage Panasonic’s Control Area Network (CAN) intrusion detection and prevention technology and Trend Micro IoT Security. Panasonic’s technology will be able to detect any unauthorized commands sent to ECUs that control driving operation, while Trend Micro IoT Security, which utilizes Trend Micro’s global security intelligence and expertise such as malware analysis, will be implemented on IVI devices such as automotive navigation systems to detect attacks that seek to exploit vulnerabilities through the internet.

Through this partnership, events identified by both technologies will be collected and sent to an analysis platform in the cloud to detect and block suspicious traffic.

The overall development will enable the provision o a solution including in-vehicle and cloud systems to prevent cyber-attacks against autonomous and connected cars. Panasonic and Trend Micro will be working jointly on the development and aim to launch commercially after 2020.

■ Architecture to be jointly developed 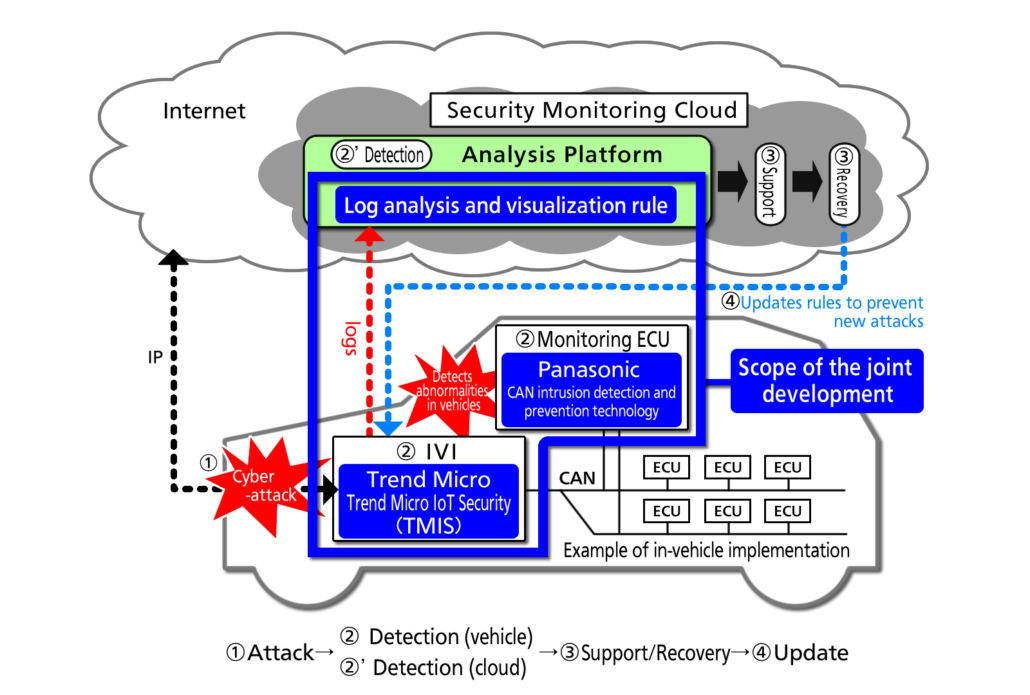