A recent Safe Cities survey offers a revealing snapshot into the plans and progress of public safety initiatives across Asia Pacific, and why integration is the key to success.

If Asia Pacific is on track to emerging as the world’s most powerful economic region, its cities are also on their way to becoming some of the planet’s smartest.

But what does the term smart city actually mean? Gartner defines a smart city as an urbanized area where multiple sectors cooperate to achieve sustain- able outcomes through the analysis of contextual, real-time information shared among sector-specific information and operational technology systems. Indeed, one of its reports estimates that smart cities accounted for more than 1.1 billion Internet of Things (IoT) items in 2015, rising to 9.7 billion by 2020.

The question that needs to be answered is can smart cities be safer places for people to live and work? And what role does the advancement of technology and IoT have to play in delivering public safety?

To find the answers, Hitachi conducted a survey of delegates at the Safe Cities Asia conference in Singapore. The event was attended by city government representatives, agencies and key municipal leaders from Asia Pacific, who discussed public security and safety challenges.

Over a quarter of the respondents had a technology background of some kind, with the rest ranging from city mayors and corporate CEOs to military, emergency services, and providers of infrastructure such as transportation and logistics (Figure 1).

In short, the survey provided the right sample base to identify the role that technology is currently playing, and could play in the future, when it comes to delivering safer cities. 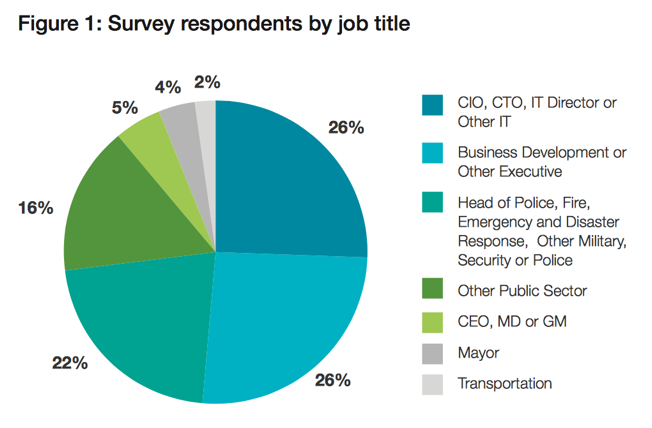 The results of the survey have been extremely revealing. Nearly 90% of respondents said that either they or their organisations had already been involved in a safety project. Moreover, 69% of respondents are planning to invest in public safety projects in their countries over the next two years.

Nearly half (44%) of the respondents estimated that their countries would invest more than US$100 million in public safety projects during the next two years. Some 22% of them predicted that the investment would be higher, at between US$100-500 million, while nearly 14% anticipated spending over US$1 billion (Figure 2).

This also raises another question: do governments know the best way to spend that money? When it comes to public safety, the answer might be no. 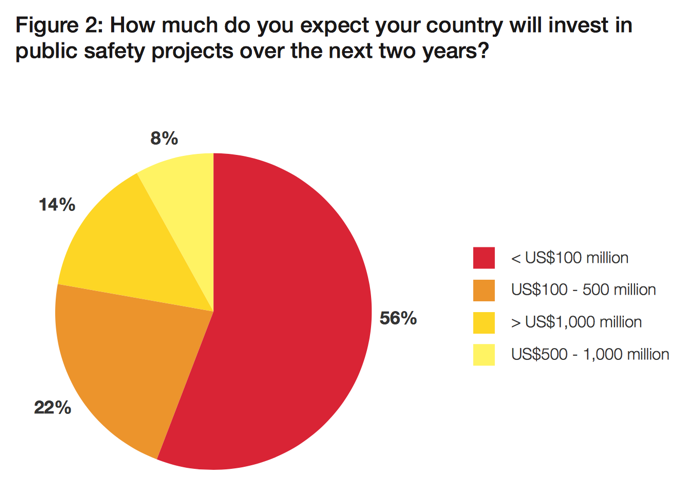 The majority of survey respondents (25%) felt that a lack of alignment between government agencies was actually holding back the implementation of public safety projects.

The main barrier to progress appears to be a failure to adopt an integrated approach to safety initiatives. The ideal solution would be to start by involving as many stakeholders as possible in the planning process, resulting in an execution that enables the implementation to play a wider role in making the city smarter and as safe as possible. 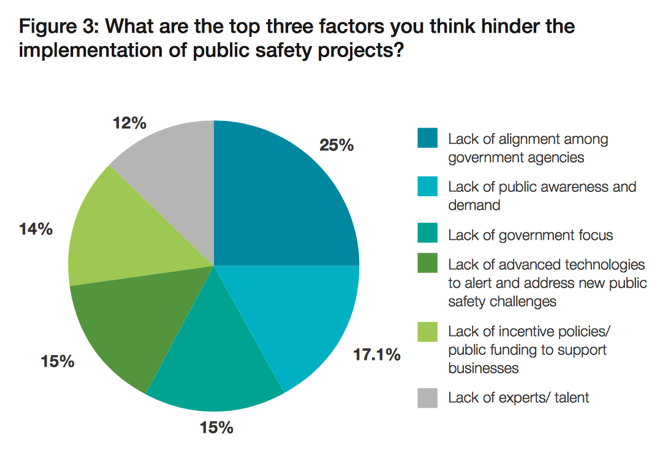 When asked what areas needed to be addressed to realize the ‘Smart City’ goal, 22% of the responses had to do with physical development initiatives, including urban construction projects and enhancing or expanding transportation infrastructure. The advancement of Internet and IT capabilities was also high on the list, with a 17% response rate (Figure 4). 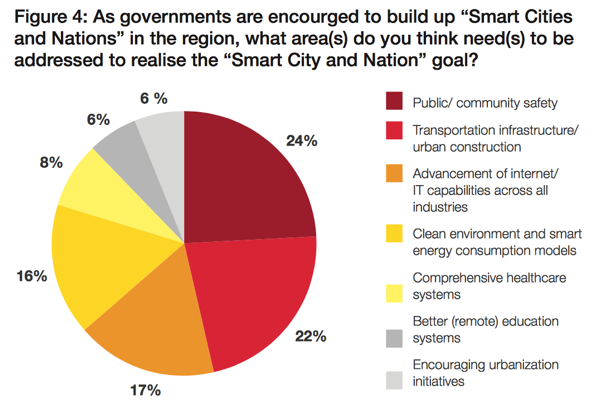 A staggering 95% of respondents rated the role of technology in ensuring public safety as Important or Very Important. The public safety technology that most plan to invest in over the next two years is surveillance, followed by big data analytics, and mobile and network technology (Figure 5). Indeed, the convergence of all three offers tremendous scope for improving both safety and security in modern cities.

The lessons learned from the big data revolution suggest that integration – exploiting the capabilities of a variety of interconnected systems in real time – offers far more value than standalone solutions in improving public safety. 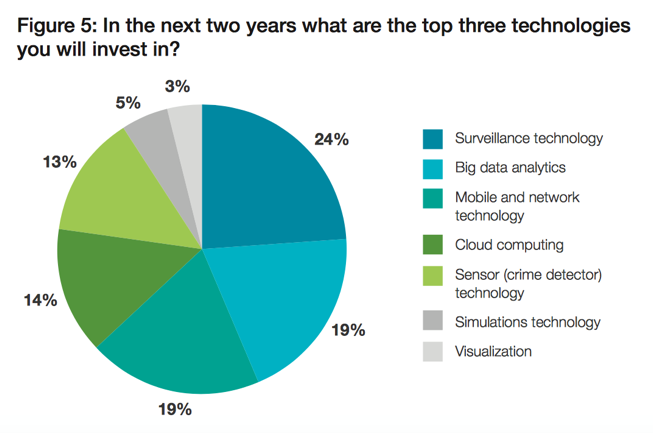 Cities that fail to take a holistic, fully integrated approach to planning for the future are likely to remain stuck with the problems of the past.

One of these perennial problems is crime (Figure 6). However, some police forces are recognizing that integrating new IT platforms with other city resources can have a dramatic impact in driving down crime rates and increasing public safety.

Urbanization and transportation play important roles in monitoring and preventing crime by identifying criminal acts, or potential criminal acts, in advance. This can be done through advanced technology by combining and analyzing data from a variety of sources, such as video cameras on trains, in department stores and scattered throughout the city, as well as other data on social platforms such as Twitter. Powerful analytics tools digest the totality of the information to extract key insights that can identify crime hot spots.

The ultimate goal for any city – smart or otherwise – is to create an environment where people can live without worrying about safety.

The secret to creating smarter and safer cities is not to work a little harder in a few specific areas. The real solution is to stop looking at each of these safe city components in isolation. To be truly effective, a municipality should view and manage all of the various parts together holistically. This allows each piece of the smart city puzzle to support the others. Moreover, by taking an integrated approach and employing more comprehensive analytics, the potential benefits multiply tremendously.