An Introduction to Amazon Alexa and Echo Devices

Voice-powered artificial intelligence (AI) for the home has become a big business for Amazon and its technology rivals Google, Apple, Samsung and Microsoft, which have all put hordes of researchers and business specialists to work, trying to build easy-to-use devices that we can talk with.

Alexa is the name of Amazon’s artificial intelligence (AI) system designed to engage with human speech and first used in the Amazon Echo and the Amazon Echo Dot devices.

Amazon Echo devices: what are they? 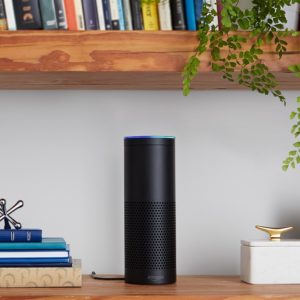 First introduced in the US in 2014, the Amazon Echo devices are cylindrical smart speakers that must be connected to a power source and which links to the Internet over Wifi.

In the default mode, the Echo continuously listens to all speech, monitoring for the “wake word” to be spoken, which is primarily set up as “Alexa.” Then, users can give a command, such as “what’s the weather,” “tell me a joke,” or “what’s the news.”

Currently, interaction and communication with Alexa is only available in English and German. However, support for Hindi and Japanese is rumored for launch in late-2017.

A companion app is available from the Apple App Store, Google Play and Amazon Appstore, and can be used to install skills, control music, manage alarms, and view shopping lists. A web interface is also available to set up compatible devices.

Alexa is also available to iPhone owners who do not have an Echo device, simply through the Alexa app. It operates similarly to Apple’s Siri, the most widely used virtual assistant in the US.

The aim of the Alexa-powered Echo devices is to be able to answer any question and carry out tasks that we would use a computer, smartphone or tablet for, all by speaking to the device. Amazon has developed advanced speech-recognition software and says it is constantly improving and adding new features.

Amazon has sold tens of millions of Alexa-powered machines since its market debut. In the US voice-powered AI devices market, Amazon is said to represent 70% of all unit sales. But competition is heating up with Google Home already selling millions of units.

The Google Home devices were announced in May 2016 and released in the US in November 2016, with subsequent releases globally throughout 2017. The device is powered by Google’s intelligent personal assistant called Google Assistant, and costs between US$49 and US$399.

The Apple HomePod is Apple’s answer to the Amazon Echo and Google Home. It is a smart speaker equipped with Apple’s Siri voice assistant that will help users with everyday tasks, control their smart homes and play music on command. The device is expected to be available for purchase in the US, UK and Australia starting December 2017 at a price of US$349.

The Echo Look has a camera with Alexa built-in to provide AI outfit recommendations, take photos, and record videos, in addition to the features available on the Echo, and costs US$199.99.

The Echo Show features a tactile 7-inch LCD screen that can be used for playing media, making video calls and other features, and costs US$229.99.

The Echo Spot has the same functions as the Echo Show, except that it has a 2.5-inch circular screen and costs US$129.99.

In Asia, Amazon has already brought its Echo devices to India. The company said it plans to invest billions into building out its India operations to tap into a rapidly expanding market and the second-largest economy after China in the region.

Amazon Echo is set to launch in Japan later this year.

Adoption of voice-powered smart speakers is taking off. According to a recent report from Juniper Research, smart devices like the Amazon Echo are set to be installed in 55% of US households by the year 2022.

By that time, over 70 million households are expected to have at least one of these smart speakers in their home, and the total of installed devices is estimated to reach 175 million.